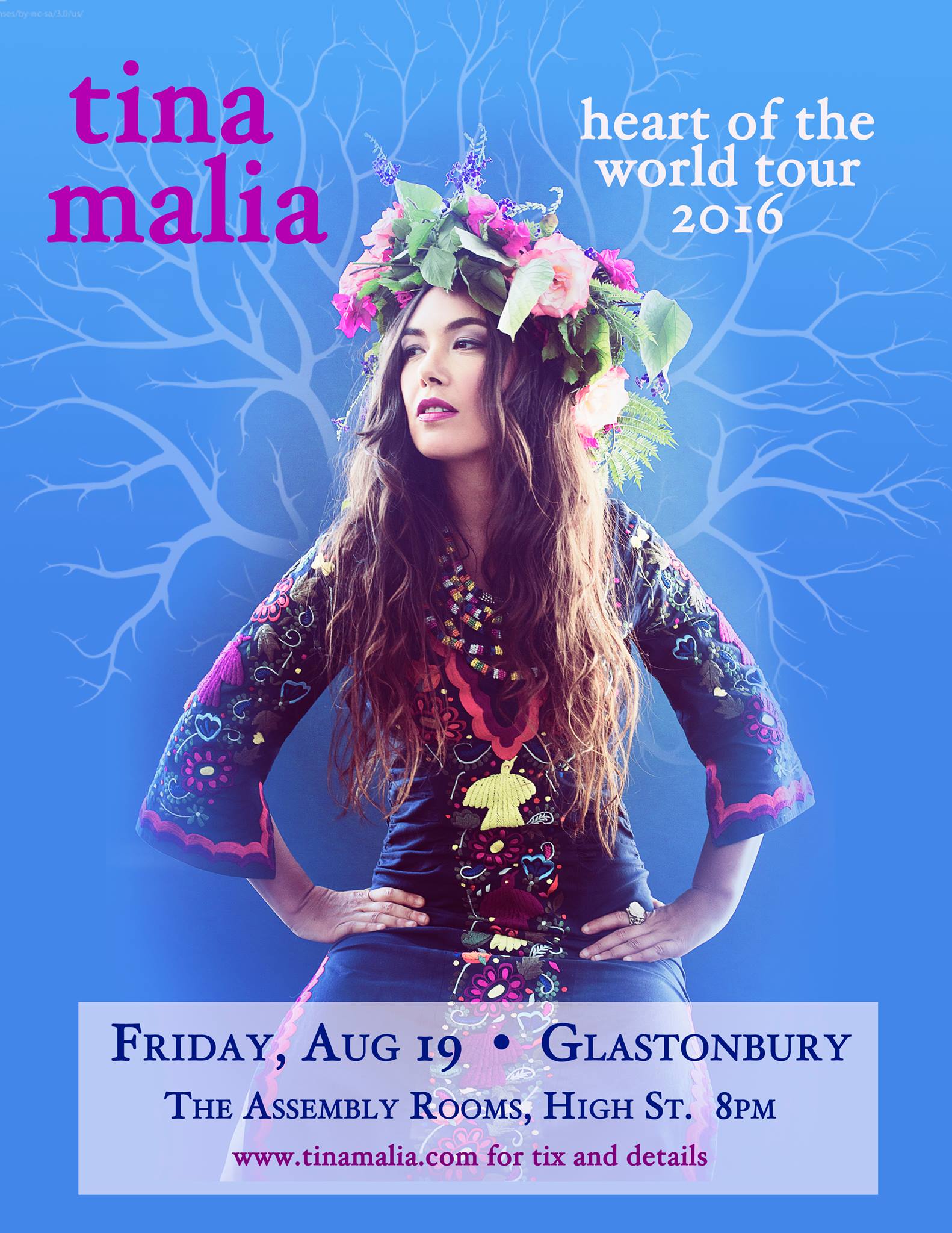 We are very excited to bring the enchanting presence & angelic voice of Tina Malia back to the shores of Avalon for this very special one off UK date in her European tour.
With solo acoustic support from the fresh 'n fruity Green T of the Avalon Roots band.

Tina Malia’s prodigious talent spans many musical genres and disciplines. As a singer, songwriter, multi-instrumentalist and record producer she has distinguished herself in styles ranging from pop to world devotional to electronic. Her own diverse and growing catalog of albums is complemented by studio and live work with iconic artists such as Carlos Santana, Bonnie Raitt, Jai Uttal, Kenny Loggins, India.Arie, Idan Raichel and Bassnectar.

There are two unifying factors in all of this. One is Tina’s remarkable voice. An instrument of exceptional purity, it can be as tender as an angel’s sigh or as powerful as a deep ocean current. The other unifying factor in Tina’s musical universe is her vision — an all-encompassing artistic perspective that embraces many of the world’s musical cultures, languages and spiritual traditions.

Creativity and diversity are her very lifeblood. Of Korean and Yugoslavian descent, Tina was tutored in classical piano and voice from an early age by her mother. But it was her dad who fostered her interest in choral singing and popular music forms.

“When I was 15 or so, performing in choirs for years and doing musical theater at school, my dad bought me my first cheap guitar. And I started listening to all the great women of folk music at the time — Joan Baez, Joni Mitchell, the Indigo Girls, Ani DiFranco, Alison Kraus and all of those wonderful artists. That became my mainstay for years. I started writing my own songs around that time.”

Tina’s self produced debut album, Shores of Avalon, appeared in 2000. Steeped in poetic Celtic, Pagan and Native American mystery, the disc announced the arrival of a major new talent. Not long after the album’s release, Tina met pioneering world devotional artist Jai Uttal, who recruited her to sing in his groundbreaking ensemble – the Pagan Love Orchestra. It was through Jai that Tina had her introduction to the rich spiritual tradition of Sanskrit mantra chanting.

“When I first started performing with Jai,” she says. “the mantras hadn’t quite seeped into me yet. But a few years later I was going through a difficult time. Jai noticed this and asked, ‘Have you ever tried really chanting mantra? I hadn’t. So I started chanting mantra every day and, sure enough, it completely brought me out of the depression I was in. To this day I attribute my sense of well-being and where I am in my life to chanting mantra. It is so simple and yet so extraordinary.”

Tina’s love of mantra is reflected on her 2005 album Jaya Bhagavan, notable for its highly original fusion of Afro-Caribbean rhythms and world/folk textures with Indian musical traditions. It was followed in 2006 by The Silent Awakening, more of a pop singer/songwriter disc, but infused with a poetic lyricism that reflects a deep spiritual longing.

In her newest offering, The Lost Frontier, the multi-talented Malia weaves flavors of pop, world & electronic music together with lush storytelling to open eyes, stir souls and remind us that the power to change the world lies in our own hands.

"The title track,” reflects Malia, “sets up the entire album because it highlights the cyclical nature of our existence and the far extremes that lie within it. The wheel is merely an observer as we move through revolutions of creation and decay, hope and despair, beauty and destruction. 'The Lost Frontier' is about acknowledging and understanding these different aspects in life and remembering that we have the power to choose what we do with that knowledge."

In the music video for the title track, a little girl leaves her home and embarks on a journey outside of the comfortable life she knows. Wandering down a desolate road, decay and ruin await as remnants of a pristine land now defiled with rusting metal hulks and waste lining every corner. The child moves through her surroundings with curiosity and playfulness, devoid of fear or blame. Perhaps she sees the world differently, or maybe her eyes merely see What Is, like those of the couture-clad songstress who instead of comforting or warning us, simply tells us like it is – with the hope that we'll put our new vantage point to productive use.

The songstress is, of course, Tina Malia – and, her eyes see promise in the face of hopelessness, a frontier that may be lost but not forgotten, and the hidden potential that we each hold in our hand.

Ms. Malia not only writes and sings her own material, she also engineers and produces her albums, playing many of the instruments included on them. For The Lost Frontier project, Malia also collaborated with contributing producers Kevin Killen, Jamie Catto, Jared May, Lynx, Alex Foster, Random Rab, Evan Bluetech and David Jenkins. The multi-Grammy winning Kevin Killen was also the project’s mixing engineer. Henry Sarmiento – whose work can be heard on the music of Lady Gaga, 50 Cent and Swedish House Mafia – was The Lost Frontier’s mastering engineer.

Malia delivers a rawness and authenticity through her extraordinary voice and musical compositions as well as in her lyrics and prose. Each song is so powerful on its own, that collectively as an album, The Lost Frontier makes an indelible mark every time one hears it. Upon each listening something new is learned, as the songs inspire instead of instigate, observe rather than point, wonder rather than blame. Each composition is part of the greater whole, which at the end of the day is an affirmation of love, of hope, of responsibility for ourselves and each other. They are, in short, the perfect way for Tina Malia's vision to be shared.